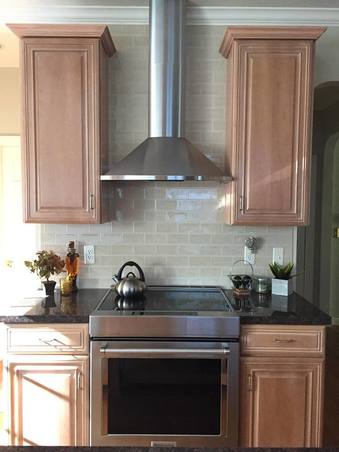 ​One of Doug Bliss's many skills
is color matching

​Can you tell which part of this cabinet was stained to match the rest? 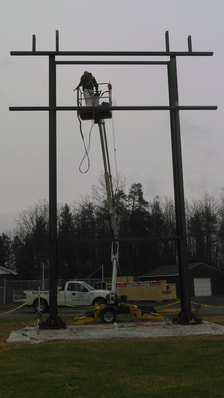 ​Doug Bliss and his crew thanked the people of Alpena for supporting our business by giving back to our community. We donated our services to Alpena High School to paint their new score board. 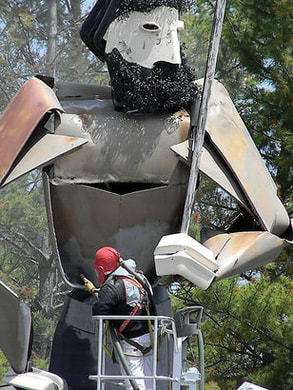 The Kaiser Paul statue at Alpena Community College received a facelift Thursday from Bliss Painting. The statue was sandblasted and then repainted due to weathering. The ACC lumberjack mascot is a symbol of the region's lumbering heritage, and was nearly 40 years old in 1999 when it was erected on the campus by the college.

The name "Kaiser Paul" comes from the statue being made almost entirely out of Kaiser automobile parts. He was built out of fenders and hoods, and his hair and beard were made of steel shavings from a machine shop. The design and construction of the statue cost $4,500.

ACC is Paul's fourth location, and he has spent his entire existence in marketing. He was created in the early 1960's by professional artist Betty Conn of Birmingham for Bill Woelk, owner of the Paul Bunyan's Gas and Eat store in Gaylord.

Woelk was a WWII Navy veteran who was born and grew up in Alpena. The statue was intended to attract gas customers from I-75 and M-32. After the gas station closed in the early 1970s, the statue went to a museum, and when the museum went out of business in 1980, it was almost scrapped, but was refurbished and repainted by Grayling Realtor Bernard Hamilton as a symbol of the AuSable-Manistee Realty Company.

When Hamilton left Michigan in 1998, then-president of ACC, Dr. Donald Newport, arranged for Kaiser Paul to continue his career in Alpena as the ACC mascot for the Lumberjacks.

The statue was repainted once by the ACC Auto Body program in 2001, and now will have a fresh coat of paint to represent ACC next to the college's Park Arena. 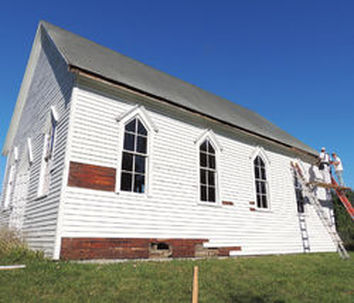 One of several historic structures located on the grounds of the Besser Museum for Northeast Michigan currently is receiving a facelift thanks to the generosity of the congregation at Spratt United Methodist Church. Because of their initiative, the exterior of the 100-year-old white clapboard church building that once served the Spratt congregation is being painted and refurbished.

The project first came about when several church members attended the museum's Log Cabin Day celebration held earlier this year and noticed that their former church building was in need of some help. "When we were at Log Cabin Day, my husband and our minister and a couple of other people just looked at the outside and saw how shabby it was getting to be," said long-time member Karen Herron. "I suggested to my husband that maybe that's something our church could do since it was our church." Article Photos News Photo by Diane SpeerIan Anderson and Jacob Kern of Bliss Painting replace sub-fascia on the old Spratt United Methodist Church building that is part of the Besser Museum’s cluster of historic structures.

The painting and refurbishment project is expected to be completed in time for a worship service held there once a year by the current Spratt United Methodist Church congregation. The suggestion was brought up at the next church board meeting and everyone agreed it was a worthy project. Memorial funds left to the church were tapped into to pay for the painting and repairs, and a young church member working this summer for Bliss Painting checked into the possibility of having the work done by Bliss Painting. According to Herron, the local painting company willingly took on the project and gave the church a very good deal. Herron said she and other church members are hoping their efforts involving the old Spratt church will inspire others in the community to follow suit and take ownership of any of the other historic structures at the museum. Museum staff also is pleased with the efforts on the part of the church congregation and Bliss Painting.

"From a staff point of view it was such a blessing and a surprise to have Bliss Painting come through and for the church congregation on their own to see a need and take the initiative," said Interim Director Chris Witulski. Like Herron, she hopes others will see the value in helping to preserve these historic buildings. "I think it is something that is inspiring, and hopefully more will do the same thing, be it monetarily or volunteer time," Witulski said, noting that other groups such as Delta Kappa Gamma, with its commitment to Green School, have helped in the past. "To not always have to be asking but to have someone come to your aid is a real shot of encouragement." Besides the Spratt Church and Green School, the other museum buildings include the Maltz Exchange Bank, McKay log cabin and a small homesteader's cabin. The bank structure, in particular, currently needs major structural work done on it, said Witulski.

​The original Spratt Church was erected in 1912. It served the community of Spratt as a prime location for school and church plays, visits by agricultural agents and county health nurses, and many other rural church or community activities. With the construction of a new Spratt United Methodist Church, the old building was relocated to the museum grounds in 1990 on a flatbed truck. The historic structure now helps to replicate for museum visitors what life was like in Northeast Michigan around the turn-of-the-century. Its upkeep is vital to the museum, said Witulski. "We are a staff of five here at the museum, and really, without the help of the community like the members at Spratt Church, we could not maintain the facility to the level of excellence that we want to reflect," Witulski said. "We very much appreciate people stepping up and adopting these projects. It's a community institution, and we just greatly appreciate the help."